Linux is a popular open-source operating system which is mostly used as a server for many websites. Most devices make use of this software such as your android phones, cameras, computers, and even your car. However, Linux has many contenders such as Apple iOS, Windows, macOS, AndroidOS, etc. Windows OS is the most popular operating system for computers, running 78% of desktops. Linux is uncommon as an operating system, running on only 2% of desktops. The argument of Linux vs Windows may seem simple seeing those statistics but the computers Linux does run on include the world's supercomputers, and servers. So why is Linux slowly growing in popularity?

So if you are also considering Linux vs Windows, you might have to check out the differences between them to make the right decision for yourself.

The users of Linux have access to the source code of the kernel and the option to adjust code according to your need. It provides benefits like rapid fixing of bugs in OS and not having to wait around for updates. On the other hand, Windows does not offer access to the source code; you will have to wait for Windows to make an update if anything is to change.

Linux has a vast range of distributors also known as DISTROS which can be easily customised as per the individual's needs. There are a range of already created DISTROS that you can pick and choose from, so if you would like your desktop to look similar to Windows or Mac there are DISTROS already developed for you. On the contrary, Windows has limited customisable options so if you just use your computer for just day-to-day use and don't need the flexibility you probably won't mind.

Linux offers top-notch reliability and security to the users. It focuses on process management, uptime, and system security. Hence, Linux users face much fewer difficulties. Due to Linux being open source if there are any issues you can fix it yourself.

However, Windows is considered to be far less reliable, even though it has made immense improvements in the last few years. The drawbacks of being user-friendly leads to weak security and instability of the system. Windows is actively working to improve the reliability and reduce the vulnerabilities but will most likely never top Linux in this category.

Many software programs, games, utilities available for Linux comes free of cost. Even significant applications such as GIMP, OpenOffice, and StarOffice are available for free. Linux, since its start, has always been free of charge. The Linux community is well known to share their developments and programs free to other Linux enthusiasts.

Most of the Windows software must be purchased, which can cost around $4.99 to $99. WindowsOS comes already installed in many computers but programs, utilities and games are usually commercial and therefore cost. While there may be a cost, Windows doews have the largest selection of software and games by a wide margin.

Since the source code for Linux is open to everyone, anyone can quickly check for any errors and fix the vulnerabilities. Hackers find it really challenging to break through Linux. Hence, it is a hugely secured software.

Windows is most prone to malware and viruses because of its huge user base despite the recent improvements in the security.

In the Linux vs Windows battle, this is a easy win for Windows. Many users find Linux complicated to install, and requires a decent knowledge of computers and software coding to use Linux well. Many new and latest distributors of Linux are getting comparatively better to use. The Linux community is working hard to make Linux easier to understand and use but still has a ways to go.

Windows offers the users a much simpler way of use and installation, albeit it takes a longer time to install. Windows is one of the easiest operating systems to use. With the majority of computers running on Windows, most people have grown up using and working on this operating system. While there have been major changes to the system, namely Windows 8 and 10, the system still runs on a familiar desktop. Windows has announced that no major changes will happen to the platform and all updates will just be improvements to Windows 10. 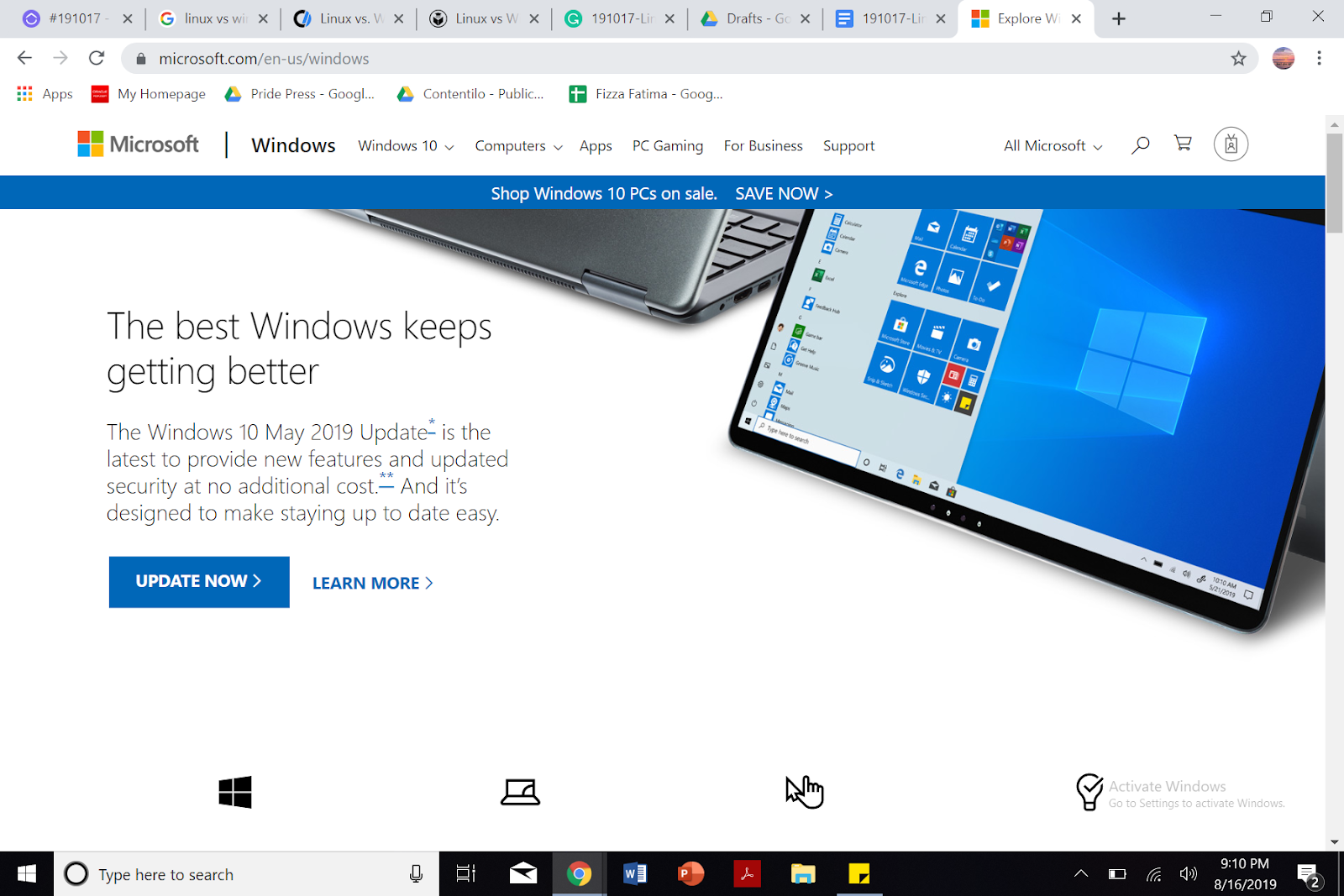 Linux is a world-renowned operating software; it offers a vast community of user support. There are various forums, websites, available for assistance at a simple online search. Moreover, there are many books available for Linux support.

Likewise, Windows also has a user community which is readily accessible to everyone. There are hundreds of books which guide you through every skill of Windows. Unlike, Linux, Windows has a massive dedicated staff to offer support if you need it, for those still struggling using operating systems this will be the best option for you.

Linux offers its user complete control over the updates so they can install it anytime they want. Moreover, it takes less time for installation and does not require any reboot.

For Windows, updates pop up at any time even when you are in the middle of completing a task which can make users frustrated at times. Not only that, but the software updates take a lot of time to install.

Most organizations and corporations, like Facebook and Twitter, opt to use Linux as servers. It is used on desktop technical experts who prefer software security and reliability. Moreover, some of the prominent uses of Linux also includes giving life to old hardware which can often not run new versions of Windows, allow low budget computing projects to reach their potential and also serve as a single operating software for single boardcomputers.

Whereas, Windows is generally a preferred choice of gamers, novice users, and business users. However, the new Windows 10 with refined and improved features is attracting many new users as well. Games are built to be able to be run on Windows so you are unlikely to run into problems running any game on a Windows. Windows is optimal for corporate business and those who just want a simple operating system for streaming and basic computer functions.

If you are trying to decide between Linux vs Windows, you need to really decide what matters to you. If you want ease-of-use and gaming than Windows is for you. If you need a high level of security, flexibility and reliability than Linux is for you. Whatever you choose, you will have a great operating server Windows and Linux are both top operating systems.

If you are looking to improve your skills in Linux, then it’s definitely worthwhile taking a look at the WithYouWithMe Portal. There are various online courses available that are also FREE for all ex-military.